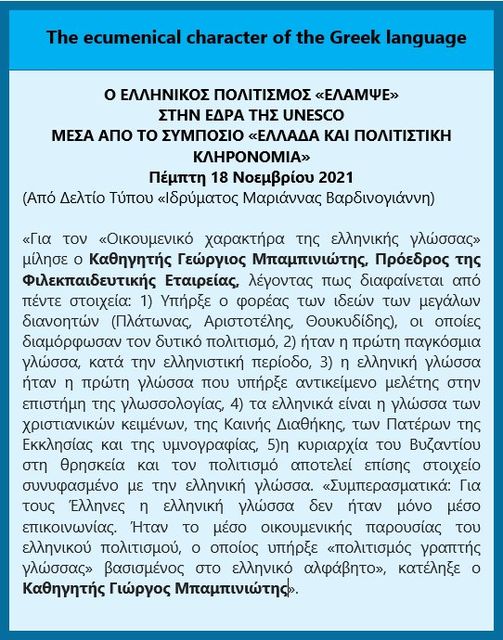 G. BABINIOTIS
The ecumenical character of the Greek language
The ecumenical character of the Greek language can be conceived by reference to five fields:
α) Greek language as value; the texts of the great Greek thinkers (Homer, Heraclitus, Socrates, Plato, Aristotle, Thucydides, Hippocrates, Plutarch a. o.) which are unique in conception, originality, depth and wealth of ideas, have had a natural influence also on Greek language, since ideas have language as their vehicle. The famous linguist ROBERT ROBINS observes:
"The intellectual life of Europe as a whole – its philosophical, moral, political and aesthetic thinking – derives its origin from the work of Greek thinkers. [...] With the Greeks, as with no other ancient or modern civilization, modern man feels an undeniable spiritual affinity."
b) Greek language as universal language; Greek, in the postclassical period with Alexander the Great, was the first world language, being the language of the trade (lingua franca) for many peoples and at the same time a cultural language (Kultursprache). The German Byzantinologist KARL KRUMBACHER has written:
"The only means of communication of the whole Greek and Hellenistic world ―in the most distant places and in the most different races and communities― was the living Greek Common Language of the Alexandrian and Roman ages; Greek was also the language of the Gospel, the language of international communication [...] in brief, it was a real universal language".
c) Greek language as a model of linguistic study; this aspect has not been sufficiently paid attention: I refer to the fact that the Greeks themselves were the first scholars of the Greek and, more generally, of the human language. We should also take into consideration that the analysis of the Greek language by the ancient Greek grammarians and philosophers constituted (through Latin) the basis of the analysis of all subsequent languages. This has been achieved only through the Greek grammatical theory and practice and its creative extension, Latin. In short, the Greek language as the main form of linguistic analysis and "metalanguage" acquired the reputation of the predominantly cultivated language, a language with high communicative prestige and influence (grammatical and syntactic terms such as grammar, syntax, verb, noun, adjective, adverb, preposition, conjunction, subject, object, predicate etc. are translated from Greek). ROBERT ROBINS' observation on this subject is also very indicative:
"The Greek triumph in spiritual culture is that it gave so much in so many areas [...]. Their achievements in the field of linguistics, where they were extremely strong, namely in the theory of grammar and in the grammatical description of language [ ...] are such that they inspire our gratitude and admiration."
d) Greek language as the language of Christian texts; the universality of Greek is directly related to the prestige that Greek has acquired internationally as the language of the New Testament, the language of the great Fathers of the Christian Church and, no less, as the language par excellence of hymnography and ecclesiastical worship (f.i. Divine Liturgy is in Greek). The "Lord's Prayer" and the "Creed of Christian belief", these most famous texts of Christianity all over the Christian world, are written in Greek. The Greek language is also associated with the Greek translation of the Old Testament by the Septuagint, used to meet the needs of the Jewish communities of the East that were Greek-speaking Communities at that time.
e) Greek language in Byzantium and Ottoman occupation. Τhe sovereignty of Christian Byzantium in the Middle Ages, along with the prestige, culture and religion of Byzantium, passed also into the Greek language. The fame of the Greek language was such that it was immediately accepted and began to be taught in the West by the scholars of Byzantium who fled there just before and after the fall of Constantinople, a fact that also helped in the beginning of the Renaissance in the West. Moreover, let's not forget that even during the years of Ottoman occupation, the glamour of the Greek language was such that in the “Balkan Federation” envisioned by RIGAS, the official language for all participating countries would be Greek. And what is most important: The meaning of the name "Γραικός", as the Greeks called themselves during the Revolution of 1821, included two main characteristics: their Christian religion and the Greek language.
To conclude: For the Greeks, the Greek language was not only a means of communication; it was the means of ecumenical presence of Greek culture, which has been “a culture of written language” based on the Greek alphabet.